Warning, this is quite a long blog post guys, but I hope you enjoy it! So, last week I came back from my first Skiing holiday in Austria! Skiing has never really been something I had thought about trying to be honest, but since meeting my partner who loves to ski and goes back year on year it was something that I decided I wanted to try. Throughout the year I had visited an indoor ski slope for day lessons so I wouldn’t be a total novice when I arrived for my first day on the slopes, falling all over the place. We booked our package holiday through Crystal Ski which included 3 days’ worth of ski lessons, ski and boot hire for myself as Thomas already had all his own equipment.

When we arrived, we had a bit of a nightmare as the reps couldn’t find our transfer to the hotel, after about 45 minutes though we did manage to locate our transfer which turned out to be a private taxi rather than a coach which was a bonus!

We were staying at Bon Alpina in a little village called Igls about 15minutes from Innsbruck city centre near Patscherkofel. Our hotel was lovely; the staff were brilliant they couldn’t do enough for us and they were so friendly. The hotel had a spa downstairs, which was great after a day of skiing as we could go for a swim in the pool or head to the sauna/steam room to just relax. Our room was also great, it was a good size double room, with a balcony that had views of the mountains and village. We booked half board so we didn’t have to venture out on an evening trying to find somewhere for food after a long day of skiing. Every night the food was amazing, they even catered for my lactose intolerance. For our evening meal, we could have soup and salad to start, followed by a choice of three different main courses and then dessert, each night the food was so good, we didn’t have one meal that we didn’t enjoy. During the week, they had two buffet nights; an Italian buffet and a traditional Tyrolean buffet. Breakfast each day was also a buffet affair with pastries, cereals, breads and a cooked option. 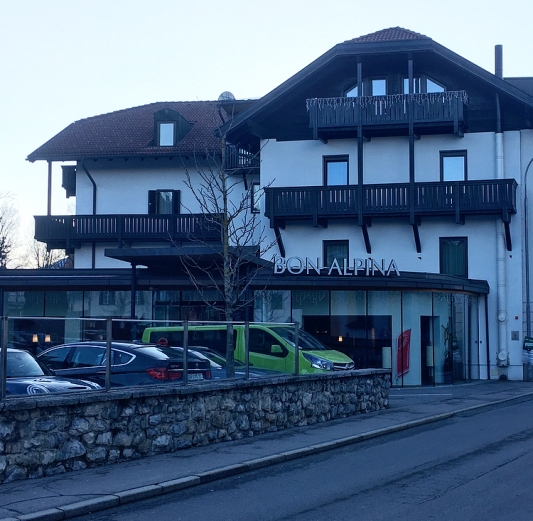 The village of Igls was quite small, it was a lovely traditional Tyrolean village with a small church, a local pub, a couple of other hotels and a few shops/café’s. One evening we visited the local fire station for a traditional Tyrolean evening, it cost only 7€ each and we had a great evening, filled with dancing and singing. We also visited the local pub on our first night, the beer was cheap and Thomas tells me it was good but unless you want to pay through the nose I wouldn’t bother with the spirts, I order a gin and tonic which cost us 7€! We couldn’t recommend Igls and Bon Alpina enough if you are looking for either a city break to Innsbruck and want to stay somewhere just outside or if you are looking to go skiing at Patscherkofel. But if you were wanting to venture to the other ski resorts in the Olympia ski world then maybe somewhere more in the middle would be better as we only got to visit 3 out of the 9 resorts due to the distance and buses.

The local free J bus stopped right outside our hotel which took us directly to the slopes at Patscherkofel or into the city centre of Innsbruck. For the first two days, we caught the bus in the morning to Patscherkofel which was a small resort with two training slopes. Whilst we were there the top of the resort was closed due to high winds so unfortunately we didn’t get to venture up to the top. On our second day at Patscherkofel I was due to start my intermediate lessons, but the instructor told us that a family of three who had been skiing for a lot of years had booked onto the lessons, and they wanted to go on the black runs which they didn’t think I was ready for yet with me still being an intimidate. So, they put me with the beginner group with people who hadn’t even skied before and were just learning to snow plough. I was so annoyed by this as I had already had beginner and intimidate lessons back in England so I could already ski, I just needed to build up my confidence of the blue slopes and progress onto the red slopes. I ended up spending the day going back to basics which was not what we had paid for! After speaking to our rep who was no help at all we decided to just do our own thing for the week and sort it out with Crystal Ski when we got back, as I wasn’t going to let it ruin our holiday.

As I had a local lift pass plus which allowed me one day at another ski resort in the Olympia ski world we decided on the Tuesday to visit Schlick 2000 as the buses from Igls only ran on a Tuesday and Friday to Schlick and the Stubai Glacier. Schlick was amazing, my face when we caught the cable car up to the top must have been a picture, it was like stepping into a winter wonderland! Everything was covered in white soft snow and the mountain views where stunning! It was the first time I had ever been anywhere like this and I was totally blown away by the views! Schlick was my favourite ski resort of the week, it had some nice long blue runs for me to practice on. There were a few restaurants to choose from on the slopes where you could stop for food or a drink which were reasonably priced. We enjoyed trying the traditional Austrian foods such as Dumpling Soups and Goulash, we also couldn’t resist having a cheeky Gluhwein (mulled red wine and spices) every day to warm ourselves up as it could get quite cold near the top. As you can probably tell I’m already having serious holiday blues, just writing this is making me want to catch the next flight back! We ended up buying an extra lift pass for me and we spent three days at Schlick as we loved it that much as Crystal Ski had decided to put extra buses on for the rest of the week due to Patscherkofel being closed so this worked it our favour. The only down side was that they cancelled the bus to Axamer Lizum on the Wednesday which we were a bit gutted about as we had wanted to visit here. 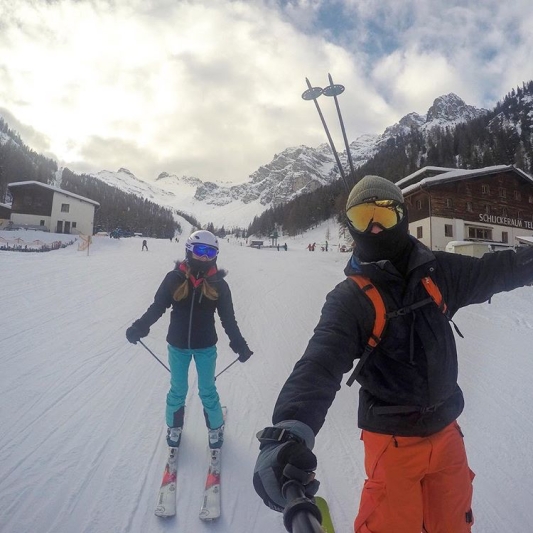 On our last day of skiing we decided to stay on the bus as it went past Schlick and headed to the Stubai Glacier. After an hour bus journey, we arrived in the Stubai Glacier. I think Thomas enjoyed the Stubai Glacier more than I did as by this point in the week I was exhausted from all the skiing and my legs ached so much. I did a few of the blue runs though and tackled my first chair lift too with my fear of heights this was a big thing for me! Thomas enjoyed the red runs at the Stubai Glacier which there were more of than at Schlick. Even though I was tired I battled on to climb the steps to the top of Tyrol at 3210 metres the views were worth it! The downside to the Stubai Glacier for us was the travel distance from Igls, the bus didn’t arrive till 10:30am in the morning and then picked us up again at 4:30pm which didn’t leave a lot of time to ski. Although to be fair as I said before for me this wasn’t a problem on this day as I was very tired but I think Thomas would have enjoyed an extra couple of hours of skiing.

For my first skiing holiday, I would say it was a big success with no broken bones or hospital trips! The views I got to experience were amazing, they were some of the most stunning views I have ever seen. I loved it so much that we are already looking at our next skiing holiday for next year.

The Wander of Two is made up of all the joys, laughter and moments in my life that just have to be shared!